As a fantastic non-lethal approach to self-defense, there’s a reason why pepper sprays are among the most popular items for LEOs and civilians alike.

If you have been searching for a reliable weapon to have on-hand, this is one of my top recommendations.

In this Sabre Pepper Spray review, we’ll get into all of the exciting features it offers. 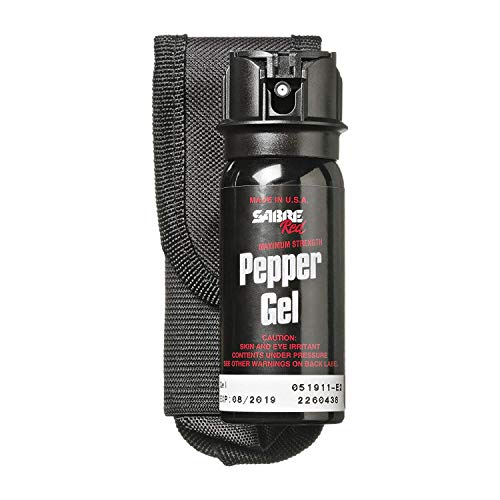 Pepper spray is one of the most commonly used self-defense weapons in the United States.

Sabre Pepper Spray reviews find an impressive number of benefits in a compact and portable design to be carried.

The unique formulation of pepper-based active ingredients gives anyone the ability to hinder their attackers.

Also, it is one of the most inexpensive self-defense options readily available to anyone.

You’ll find in most Sabre Red Pepper Spray reviews that the brand takes it a step further by improving the traditional pepper spray concept.

One of the most significant advantages of this formula is that it capitalizes on the benefits of gel.

I prefer gel pepper spray because it’s far more efficient, reliable, and predictable in any situation.

Gel pepper spray travels up to 20% farther than a regular spray, allowing me to put more distance between the attacker and myself.

I have also found that since the liquid is much thicker, which lessens the suspect’s chance of wiping it off their face.

With the unique idea of developing a thicker liquid to be sprayed, using it in close quarters is much simpler.

It’s a phenomenal alternative for law enforcement officers, especially when compared to tasers and stun guns.

This product is often utilized in agencies worldwide, primarily because of how easy they are to use. 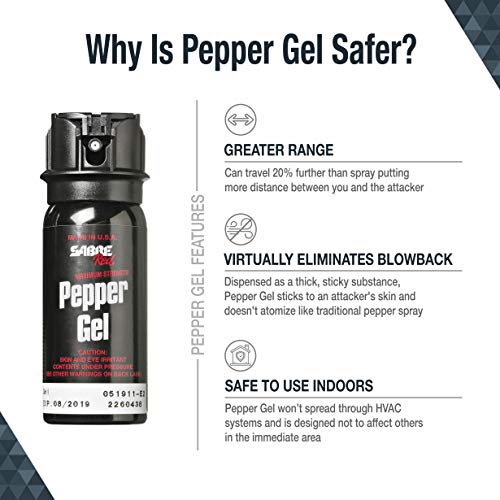 Who Is This Pepper Spray Meant For?

Pepper spray is a fantastic addition to any law enforcement officer’s kit, as long as it’s within regulations.

Instead of always reaching for your stun gun or firearm, you have the opportunity to choose a less-lethal deterrent.

I’ve found it most useful for incapacitating a subject resisting arrest or acting aggressively.

It can also be used by civilians in many circumstances.

Before you start shopping for pepper spray, I highly recommend looking into your local laws.

Individual states, cities, and countries prevent their citizens and residents from purchasing and using pepper spray.

If you’re in the clear, it can be a phenomenal way to protect yourself from attackers.

Pepper spray is useful for women and men alike to ward off human and animal threats.

I always carry an extra canister when cycling, hiking, or camping in the wilderness.

The primary objective of the Sabre Pepper Spray is to make its way into the orifices of the threat.

The gel seeps into the skin and tissue, causing significant burning and inflammation similar to cayenne pepper.

The threat will begin tearing profusely, find it challenging to breathe, and will be temporarily blinded.

Using OC pepper as the primary ingredient, the target is incapacitated, allowing you to escape quickly.

Or, in the eyes of a law enforcement officer, engage the suspect for a more peaceful arrest.

I received three items in the package that make this weapon ready to use straight away.

First, I received the 1.8 oz bottle of the product and a holster that could clip onto my belt.

The holster features a Velcro closure, making it relatively easy to access in an emergency.

One of the best components I found was a pamphlet with thorough instructions for use.

It also provides several links to training videos that I highly recommend for first-time users.

With professional advice, you can safely make the most out of your pepper spray.

The only other thing I would find convenient to have is a built-in belt clip.

Although the holster is useful, it’s not as high-quality as I would have expected it to be.

A belt clip would have made it easier to carry the spray along with my other police gear on my belt. 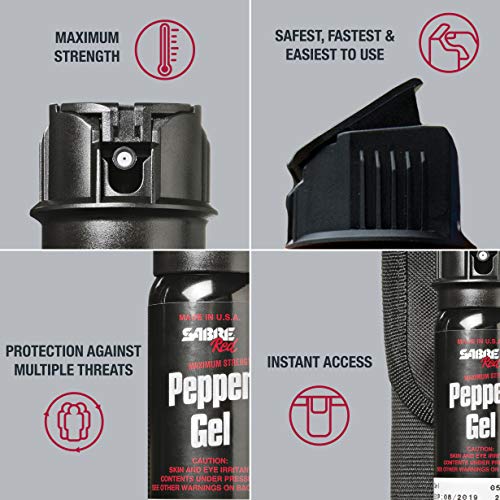 Overview of the Features

After reading Sabred Red Pepper spray reviews and trying it out myself, I am confident that this is a useful item to have on hand.

Here’s what this product offers:

When buying self-defense weapons, you’re going to want to make sure you choose a brand you can trust.

Sabre is one of the top-recommended manufacturers for pepper spray, as their products are used worldwide.

Every batch of spray is manufactured in the United States to ensure top-tier quality.

One of my largest gripes with pepper spray is that it can go bad within one to two years of purchase.

Considering it’s not something I use regularly, I don’t want to spend the money on replacements every 12 to 24 months.

Sabre has invented a formula that lasts up to two times longer than most other pepper spray brands.

Each can lasts four years from the manufacturing date, giving me peace of mind.

It’s incredibly dangerous to try to subdue a subject only to have them wipe the product away, unaffected.

This formula is strictly tested in HPLC labs, ensuring it has maximum effectiveness.

The Sabre Red Pepper is the hottest active ingredient the company has available.

You’ll have a concentration of 1.33% capsaicinoids, which is Level III in their ranking system.

You can guarantee it won’t only stun attackers but also stop them in their tracks.

There is some concern as to the efficiency of pepper spray, especially among LEOs.

It’s known that some brands have failure rates as high as 30%, which is far too large of a margin.

Through strenuous testing, Sabre was able to significantly reduce the failure rate you’d experience with other brands.

My preference for gel-based pepper sprays is satisfied with the consistency of this item.

It has a thick consistency that prevents the atomizing attributed to generic pepper sprays.

I’ve found that it’s a reliable option to be used indoors and outdoors with minimal blowback.

I also prefer it because it cannot travel through HVAC systems and affect others inadvertently.

A considerable benefit of gel-based pepper spray is that it travels farther with an average 20% range increase.

One spray of this product can give me up to 18 feet of range with ease.

With the addition of UV marking dye, making positive identifications has become much more straightforward.

In situations with multiple suspects, our department has found investigatory practices to be much smoother.

Also, it can be a beneficial source of evidence when filling out paperwork. 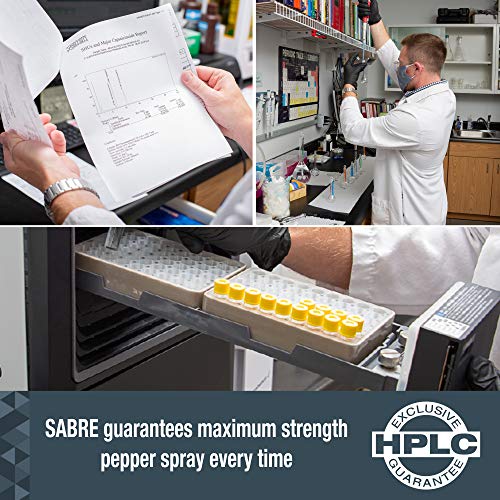 How to Use It

I highly recommend referring to Sabre Red Pepper Spray reviews and videos to get a visual idea of effectively using it.

However, this product is relatively straightforward, and with enough practice, you can use the spray to your advantage.

In fact, there are testers you can purchase directly from Sabre instead of wasting product.

The first thing you’ll need is confidence, as it can ensure you have a steady hand while firing.

You will also want to be aware of your surroundings to guarantee you can effectively target your assailant.

By disengaging the safety and flipping open the top, you’ll expose the trigger.

Press down on the trigger to release a steady stream of pepper spray into the eyes of the attacker.

You must saturate the ocular area to get the most effective defense possible.

Although the effects of pepper spray are extended, it’s essential to make your escape quickly.

Alternatively, police can move forward with their arrest, as their suspect will be momentarily incapacitated. 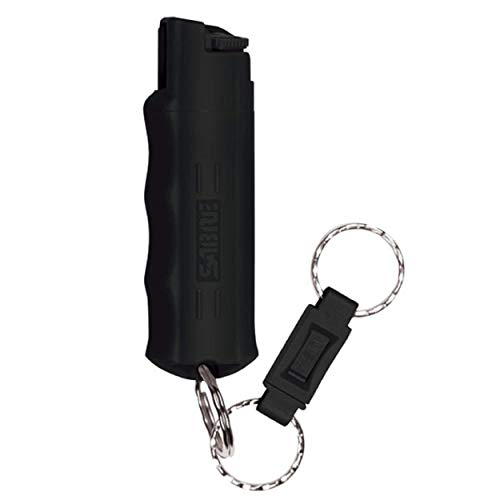 Sabre is a tough product to beat, which is why the alternative I chose for this Sabre Red Pepper Spray review is nearly identical.

The main difference between the two is the packaging, as this product can be preferred by law enforcement.

The Sabre Red Pepper Spray Keychain is a remarkable product for easy access.

Instead of being a standard bottle of spray, the spray is contained within a specialized tactical casing.

I prefer the ergonomic finger grips on the case that allow for accurate aim, even in tensed situations.

The keychain is another unique feature; it can be attached to your keys and detached with the quick-release technology.

Fortunately, the pepper spray is the same formula as the police-issued Sabre Red Pepper Spray.

As I tested it for this Sabre Red Pepper spray review, I found that another great feature of this item is its safe, reinforced trigger and twist lock.

Both of these components work in sync to prevent accidental firing.

Most Sabre Pepper Spray reviews are positive because it’s a well-rounded product made in the USA.

I highly recommend considering the unique advantages we discussed in this Sabre Pepper Spray review to help you find the best self-defense tool.

Whether it’s for police officers, security guards, or civilians, it’s one of the most sought-after products that’s worth every penny.

5 shares
Special offer for our visitors