When discussing non-lethal self-defense, traditional pepper spray is likely the first thing that springs to mind for most people.

There are almost no restrictions on carrying one. Plus, it is an effective, non-lethal weapon for neutralizing a hostile person.

Pepper gel works in the same manner as pepper spray does, but with a slight difference in dispersal and active ingredients.

When it comes to these self-defense products, which is the better choice between pepper spray vs gel?

By learning the distinct differences between pepper spray and gel, you can compare their advantages and drawbacks to pick the right choice.

How Does a Pepper Spray or Gel Work?

Capsaicin is a substance in cayenne peppers originally extracted in crystalline form and first discovered in 1878.

After some time, it was recognized as a chemical that can create a burning sensation in the eyes, skin, and other body parts.

This reason is why it is used to make the formula that makes pepper spray and gel so effective.

Aside from self-defense, capsaicin is used topically to treat postherpetic neuralgia.

The chemical is also applicable for alleviating pain in conditions such as psoriasis, arthritis, psoriasis, and diabetic neuropathy.

Scoville heat units (SHU) are used to calculate the quantity of capsaicin in a formula, which is the definitive component in pepper spray and gel.

Because capsaicin is the principal ingredient, companies use SHUs to rank their products. The higher the Scoville rating, the more powerful the substance.

Most standard products have a two-million SHU rating, which is around four times the heat intensity of a habanero.

This level of SHU is more than enough to repel potential attackers, but opting for a higher rating is not necessarily bad.

Some of the most potent commercial pepper sprays and gels can have five million SHUs.

Some argue that the SHU is inaccurate since it is a subjective evaluation of heat intensity.

Instead, they believe that the major capsaicinoids (MC) rating is a more precise estimate.

The MC rating uses scientific methods to measure the capsaicinoids’ quantitative heat in a laboratory.

It outlines the formula of the product and provides a percentage-based strength rating.

Commercial defense pepper spray and gel usually get less than 1.33%.

Pepper spray is a defense spray that contains an inflammatory compound extracted from cayenne pepper to repel hostile individuals.

For decades, it has been one of the most recommended tools for personal protection against attackers.

This tool was first used by law enforcement in the United States for crowd control, neutralizing unruly protesters and criminals.

It is a lacrimator, stimulating the production of tears in the eyes.

The primary ingredient in pepper spray is an oil called oleoresin capsicum (OC), extracted from plants of the genus Capsicum.

Capsicum oil is also commonly used in the production of bear spray, which is an aerosol product designed to ward off bears and other animals.

Pepper gel products are one of the recent additions to the personal defense category. They may have the same ingredients in pepper sprays but in a thick, sticky gel form.

Let’s compare how these two products differ when looking at various factors.

The most effective is about a 10 to 12-foot range, although it may vary depending on the canister pressure and delivery system.

On the other hand, pepper gel users have a slight advantage under this category. That’s because the gel can reach longer distances than pepper spray droplets.

An average pepper gel has an effective range with a sticky viscosity of around 18 to 25 feet. 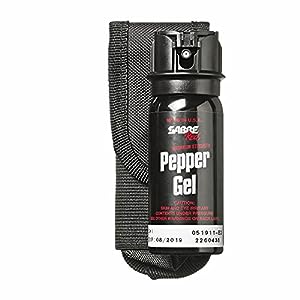 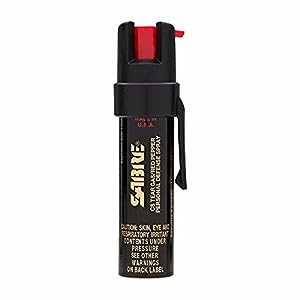 Pepper spray offers a variety of spread patterns to choose from, including stream, foam, and fog.

While these patterns have distinct characteristics, the lightweight properties of the droplets will affect the effectiveness of the dispersal.

Pepper spray droplets are light and easy to disperse, but they have one major disadvantage: blowback or cross – contamination.

This happens if the spray flies back into your face, which essentially means you sprayed yourself.

In comparison, pepper gel products have a thicker composition with a linear ballistic stream pattern.

Because of its viscosity, the gel formula might provide more precision when shooting in an open or windy environment due to its concentrated stream feature.

It may appear that pepper gel has an overwhelming advantage because of its tight stream pattern. However, it still depends if you can hit your target.

Pepper spray doesn’t require too much emphasis on accuracy, as droplets can spread in multiple directions in a single discharge.

Due to the presence of OC in both spray and gel, they induce a burning sensation, temporary blindness, constant tearing, and more.

The aforementioned effects typically last about 30 to 45 minutes, giving you the chance to either run or counter-attack your assailant.

The difference is that gel clings better to the face, which adds more unpleasantries to the recipient of the discharge.

On top of that, if they attempt to rub it off, the gel’s sticky properties become more apparent.

Still, the effectiveness of the symptoms is also based on the formula’s strength. A higher OC content means better potency.

Standard spray and gel products have an OC concentration between 2% and 10%.

The Limitations of Both Pepper Spray and Gel

While both of these self-defense tools are proven effective, they should only be regarded as a means to distract the attacker.

Even if you managed to cover their faces with the discharge, chances are it won’t render them immobile.

On the contrary, getting sprayed might cause more hostility and rage toward you, which can make the situation worse.

Here are other things to keep in mind when using either self-defense tools:

Not to be used when attacker is too close

Criminals prefer the element of surprise when they carry out their illegal acts. They often resort to distractions so that you would be less focused and prone to assault.

More often than not, they will look at your belongings to see if you are carrying a pepper spray or gel before attacking you.

Even if you’re trained to handle a self-defense tool, assailants will still not hesitate to grab your arms to prevent you from moving.

When this happens, it would be difficult to use your spray against them. If you do, you risk having the spray hit you.

Lack of practice makes it useless

Most, if not all civilians, often have pepper spray or gel hidden. They would attach it to their keychains or purses, usually buried deep inside the bag.

When an assault happens, the attacker has the upper hand since the spray is not immediately accessible.

Also, if a perpetrator attacks inside the house, it’s almost a given that the pepper spray or gel is out of reach.

If a person has never used a pepper spray or gel before, they won’t act decisively and might struggle with what to do first once an attack happens.

There are cases where the owner misuses the product due to the struggle with the assailant.

One common occurrence is accidentally emptying the spray’s content, which can result in two unfavorable scenarios.

Either the person sprayed it and didn’t hit anyone, or the inadvertent exposure to OC incapacitates him.

While these scenarios are often associated with pepper spray, accidental gel dispersal could easily empty the canister.

Furthermore, since most civilian pepper sprays and gels have a small container, the user only have a few chances to hit your attacker.

With a couple of misses, it’s easy to find themselves essentially defenseless.

Which Is the Better Pick?

While pepper spray vs gel share many similarities, there are some key distinctions highlighted earlier that make the former better than the latter.

The extended range, precision, and effectivity of pepper gel make it the superior choice over the traditional pepper spray.

Still, you have to consider the heat intensity level, as it accentuates how potent the effects can be.

2 thoughts on “Pepper Spray vs Gel: Which is Better?”