Illinois is a great destination, especially in the summer.

However, the state has a plethora of cultural attractions and shopping centers that make it a fun place to visit any time of the year.

Even so, before you plan your trip to Illinois, you must always think about your safety.

Maybe you have experienced being harassed or robbed by someone while traveling.

Or maybe you’re going alone, and you’re just worried about your safety.

Thus, you might be asking, is pepper spray legal in Illinois? Let’s find out.

Is Pepper Spray Legal in Illinois?

Illinois is very liberal when it comes to ownership of self-defense devices, including pepper sprays.

The state places no restrictions on the use, sale, and manufacture of defensive sprays.

They also don’t have policies limiting the quantity of pepper spray, although you shouldn’t be bringing large canisters suitable for dispersing riots.

Who Can Carry Pepper Spray in Illinois?

Anyone who is at least 18 years of age is allowed to possess pepper spray in the State of Illinois.

However, there are a few exceptions. For instance, those with a felony or misdemeanor record are banned from possessing pepper spray.

In Chicago, using pepper spray or any similar device in an enclosed room, restaurant, bar, or public occupation containing 20 or more people is prohibited unless that person is engaged in law enforcement activity.

What Types of Pepper Spray Are Allowed in Illinois?

The state of Illinois poses no restrictions on the type of defensive spray you can carry.

Thus, you are free to bring or possess any of the following sprays:

This is the most common type of pepper spray.

When sprayed on someone, it can cause burning, pain, and tears.

It can even cause temporary blindness.

When sprayed, these chemicals react with the sensory nerve receptors, causing pain and discomfort in the skin, eyes, and mucus membranes.

CS works almost instantly, but the effects will wane after 30 minutes to a few hours. 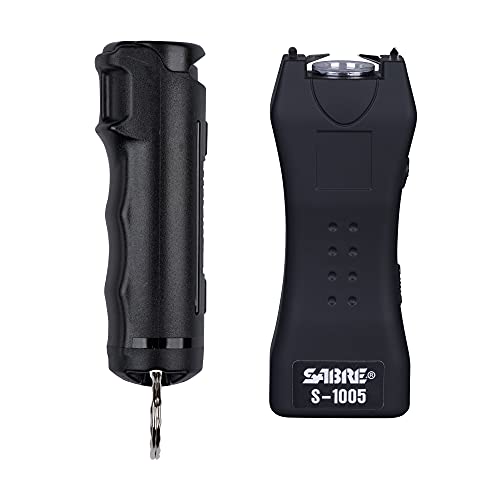 Are Stun Guns Legal in Illinois?

Tasers and stun guns are hand-held devices that can temporarily incapacitate people through electrocution.

Stun guns send a charge on a direct contact while tasers shoot darts attached to wires to deliver an electrical charge.

Before, the possession of stun guns in Illinois was illegal.

However, in 2022, the Supreme Court overturned a ban on stun guns and tasers, citing that these are bearable arms that civilians can carry to protect themselves.

However, before buying or possessing a stun gun or taser in Illinois, you must first secure a state-issued Firearm Owners’ Identification Card (FOID) unless you are an on-duty law enforcement officer or a military service member.

To get a FOID, you must meet certain criteria. You must be at least 21 years old.

If you’re younger, you must secure your parent’s consent, and you must not have a history of juvenile delinquency or conviction of misdemeanor.

You aren’t a subject of a protection order that prohibits someone from possessing a firearm.

You aren’t addicted to narcotics.

Also, even if you have a FOID, you can’t use a stun gun or Taser in certain places, such as:

Again, the use of pepper spray is only limited to protecting yourself, your property, or others from an attacker.

Can You Bring Pepper Spray on a Plane?

If you’re going to Illinois via a plane, you cannot store pepper spray in your carry-on luggage.

You can only put it in your checked bag. Also, there’s a limitation on the quantity of pepper spray you can bring.

According to the TSA, only up to 188 ml of pepper or mace spray is allowed in checked bags.

Also, your device should have a safety mechanism to avoid discharging it accidentally.

Self-defense sprays with two percent by mass of tear gas or OC and CS irritants are also prohibited in checked baggage.

To be safe, it’s better just to buy pepper spray once you land in Illinois.

You can also get one at any Walmart or Target store.

Can You Ship Pepper Spray to Illinois?

Yes, it is legal to ship pepper spray to Illinois. However, these products contain substances that the USPS considers hazardous.

Thus, the best option is to ship them via USPS ground service.

Note that the USPS ground service takes much longer to arrive than air-based services.

Typically, it will take your parcel three to eight business days to arrive in Illinois.

While ground service is the simplest way to ship defensive sprays to Illinois, there are some instances wherein you can ship via air-based service, but they often have many requirements.

How to Use Pepper Spray Correctly

Defense sprays are arguably the most popular and effective non-lethal self-defense tool on the market.

However, to successfully defend yourself against an attacker, you need to know how to use pepper spray properly.

The first step is knowing how to hold pepper spray properly.

Most people hold it by lightly wrapping their palms around the canister like a claw and their index finger over the actuator.

The problem with this method is it makes it easy for the attacker to grab and snatch the device from you.

Thus, the right way to hold pepper spray is to wrap your dominant hand around the canister to form a fist and use your thumb to deploy the spray.

Knowing how your device sprays OC is extremely important as it determines how the spray can go out and at what maximum distance it can reach.

You also need to know the amount of chemical in each canister, the number of sprays, and how the spray should be deployed.

Other Ways to Protect Yourself in Illinois

Pepper spray isn’t the only way to play it safe. Here are some more safety tips when you’re wandering the beautiful streets of Illinois:

It’s best to bring a device like pepper spray that can help protect yourself from an attacker.

However, you must learn how to use it properly to be confident when the going gets tough.

Make sure to practice holding and deploying the spray so you will run on auto-pilot during a stressful and life-threatening situation.

3 shares
Special offer for our visitors