The eyes are considered by many as the most vulnerable external organ.

They are more sensitive and prone to permanent damage than the skin, which makes them the ideal target for attackers.

One common scenario is during exposure to pepper spray, where our eyes are the most affected.

Whether it is used by a police officer or a hostile counter-protester, contact with pepper spray can lead to intense pain.

That said, many still wonder, “Does pepper spray damage eyes besides the momentary effects?”

What Is Pepper Spray Made Of?

There are a number of formulations companies use to make pepper spray products.

Because of this, it may be confusing to the general public to understand how they work.

Manufacturers use different pepper spray heat scales and other technical terminology for marketing their goods.

Nonetheless, the most common variety of pepper spray is made from chili pepper oil.

Capsaicinoids make contact with the body’s sensory nerve terminals that sense true heat. That is the reason why consuming chili peppers causes a burning sensation.

If your eyes get capsaicin exposure from pepper spray, expect a more severe pain than what you can get from slicing pepper fruits.

An OC spray may also contain various components like carbon dioxide, nitrogen, or halogenated hydrocarbons for discharging the contents.

These elements could contribute to the toxic effects of pepper spray, but there’s no conclusive evidence that supports this idea.

What the Labels Mean

The capsaicinoids concentration in chili peppers varies greatly across batches.

It is affected by variables such as sunlight exposure, growth temperature, irrigation, soil type, and more.

Some companies may provide an inaccurate SHU level because of the possible inconsistency of the aforementioned elements.

The pepper oil derived from chili fruits may also contain impurities, such as odors from the chili fruits, pesticides, and fertilizers used in cultivation.

Nevertheless, here are possible labels you’ll find on your pepper spray and what they could mean.

Some companies use the MC scale rather than the SHU for marketing their pepper spray products.

The MC percentage indicates the overall potency of the pepper spray formulation.

Theoretically, this measurement is more accurate because the intensity is often measured in a third-party laboratory.

Sprays with 0.18 to 1.33 percent MC are the standard variety. A higher percentage of MC of the pepper spray means it is more potent.

A 1.4% pepper spray can induce effects that will last up to 45 minutes without causing severe harm to the eyes or skin. 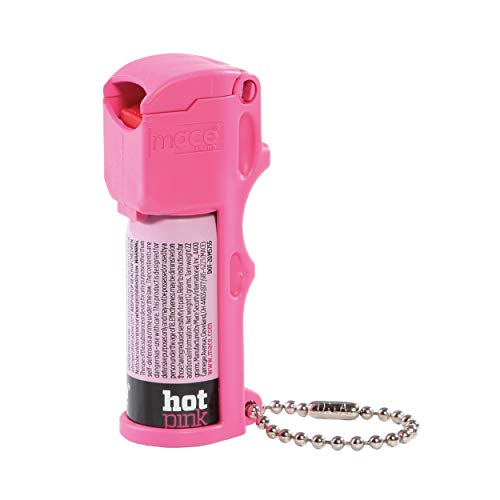 Benefits of Having Pepper Spray

It’s not only law enforcement agencies that find pepper spray to be effective in neutralizing hostility.

Pepper spray has shown to be an effective personal protection agent that is simple to use and accessible.

Many individuals love that it can easily fit in a handbag or a small pocket.

OC pepper spray is widely used for protection against assailants like muggers and predators.

Even if you can’t make direct contact with the eyes, getting the pepper spray on the chest, nose, or mouth is usually enough to stop the assailant.

At the very least, if your attacker gets respiratory tract exposure, corneal injury, or chest pain, it would give you enough time to run away and call the authorities.

What Happens When You Get Pepper Spray on Your Eyes?

However, eye exposure has worse and more dangerous effects. The stinging pain is relatively comparable to how you feel while cutting onions, only multiplied by a thousand.

Getting pepper-sprayed will trigger hypersecretion of tears with swelling and eye irritation, but the effect is significantly more intense.

If you’ve ever touched your eyes while cutting a hot pepper, you are essentially experiencing the effects of capsaicin.

Your eyes close involuntarily, making it tremendously challenging to control your eyelids.

This is a natural physical response that intends to protect your eyes from the inflammatory agent that irritates them, but it’s somehow contradictory.

The eyes generate tears to flush the irritant, so having extreme difficulties in blinking makes the removal more arduous.

As mentioned earlier, the effects of oleoresin capsicum has an instantaneous effect, causing the eyes to be constantly tearing.

You will most certainly experience intense irritation, neurogenic inflammation, and temporary blindness.

Aside from those, there might also be adverse side effects such as throat irritation, acute corneal abrasion, sneezing, and shortness of breath.

Because pepper spray disrupts the cornea’s epithelial layer, those with impaired corneal nerves are more vulnerable to these effects than those without.

Acute eye pain can also happen even when several minutes after exposure have passed.

Long-Term Effects of Pepper Spray on the Eyes

The acute effects mentioned in the previous section would last for about half an hour if treated properly or less if you received professional medical attention.

However, you may ask if, “Does pepper spray damage eyes permanently?”

The short answer is no; there is no definite evidence that pepper spray causes lasting eye issues or severe injuries.

The cornea is the reflective surface of tissue that serves as the eyes’ external layer. It operates with the lens to focus visual information on the retina.

The curving border of the cornea bends light rays as they enter the eyes.

Overall, the cornea improves visual concentration while serving as a barrier against bacteria and debris.

Because the cornea plays an important role in our ability to see, an injury like corneal erosion might result in vision loss or blindness.

You have to consult a medical doctor immediately if you experience these symptoms.

What To Do if Exposed To Pepper Spray

It’s not uncommon for law enforcement officers to use anti-riot agents like pepper spray to neutralize protesters.

The problem is that accidental exposure can happen, even if you are wearing protective gear.

A spray with OC as its active substance is not lethal but will bring extreme discomfort if you don’t take proper action.

In line with that, here are some important things to keep in mind:

Minutes after exposure, you may feel better if you happen to act quickly and have the mentioned items on hand.

How To Deal With Pepper Spray Contamination

Since an OC spray may contain natural ingredients, you may think that it’s harmless when it makes contact with food and other related items.

That shouldn’t be the case because, more often than not, a canister can have artificial chemical agents that can be hazardous if ingested.

OC is an oil-based substance, making it more challenging to remove. As such, using a detergent solution is advisable when wiping it off from various surfaces.

You will also want to discard exposed food products as it would be too challenging to cleanse the OC out of them.

There is no definitive guide that outlines how to decontaminate fruits and vegetables with peels or items in packaging successfully.

Although pepper spray is presumably biodegradable, no research has been discovered that determines the time it needs to biodegrade.

It would be overly optimistic and naive that washing thoroughly will effectively remove all residuals.

As a result, it is advisable to throw away food products contaminated by pepper spray discharge, even if the packaging is not compromised.

Furthermore, the extent of contamination may differ depending on the distance of the discharge, ventilation, and other factors.

People who clean pepper spray-contaminated individuals and areas should use protective equipment and complimentary supplies to protect their eyes, nose, mouth, and skin.

Proper and Immediate Treatment Is a Must

Due to its effects, an OC pepper spray is used as a weapon against protesters and as a protective agent against criminals.

It can induce adverse effects on our eyes that can worsen if left untreated.

By knowing how it impacts our vision and other body parts, we can prevent and avoid the inconveniences or medical bills.