It has been one of the most commonly-used personal protection spray devices for decades.

Many consider it as self-defense spray, and rightfully so because its effects can be hard to deal with.

From constant tearing to temporary blindness, there are more than enough pepper spray exposure effects that could render anyone helpless.

This may make you wonder and ask, “What is pepper spray made of?” We’ll find out the core components of this product and other relevant subjects.

What Was the Original Purpose of Pepper Spray?

Believe it or not, chili pepper has been utilized as a weapon even during ancient times.

There are documents indicating that it was used in China when ground forces wrapped strong pepper in rice paper before throwing it at their enemies.

Brazil’s indigenous people are ahead of their time, as they essentially produced the prototype version of the pepper spray.

The device produced smoke made from burnt chili peppers that draw tears to neutralize their enemies.

In the modern era, a component called oleoresin capsicum (OC) was mass-produced for self-defense against dangerous animals.

This oil-based substance is extracted from hot peppers and placed inside of a canister can together with other ingredients.

The product is colloquially referred to as OC spray or pepper spray.

By the 1990s, most local police enforcement utilized pepper spray and tear gasses as a non-lethal method of subduing unruly individuals.

Nowadays, it is recognized as one of the must-have civilian products, especially for women, for personal protection gear.

Who Should Use Pepper Spray?

It’s not only the front-line police officers or private security agents who need pepper spray.

Defense products have become a necessity not only for law enforcers but also for private individuals.

With the increasing number of assaults, rapes, robberies, and home invasions in recent years, it’s recommended to have a canister of pepper spray ready.

However, civilians must first check with their local authorities if there are restrictions on possession of pepper spray.

Outside the US, some states might have some limitations when it comes to carrying an oleoresin capsicum spray.

What Is Pepper Spray Made Of?

The active ingredient in pepper spray is a mixture of oleoresin capsicum, a natural extract found in hot chili peppers, with other solutions.

Among its components is the chemical called capsaicin, which is the inflammatory agent that causes the burning sensation.

OC is colorless, odorless, and incredibly potent. One milligram of pure capsaicin is enough to cause blisters when it makes contact with skin.

In copious amounts, the sensation is so intense that you can still detect the heat even when submerged in water.

Aerosol spray canisters are the containers used to store and dispense the OC formula.

The entire solution is pressurized inside the canister, allowing you to pepper spray someone at an effective range. 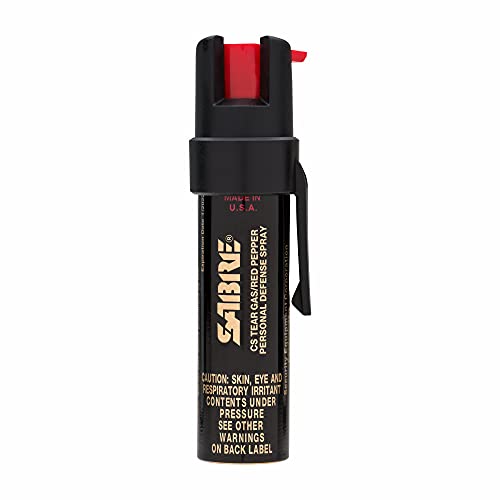 What Happens If You Get Pepper Sprayed?

Exposure to pepper spray can produce immediate adverse effects and potential health hazards on the eyes, skin, mouth, and nose.

The degree of symptoms varies based on the duration, volume, and distance from the spray release.

These effects can be harder to deal with if you are wearing contact lenses.

Corneal sensitivity may also be temporarily affected if the exposure is direct with high OC volume.

As for the skin, you can experience swelling, irritation, and blisters.

A burning feeling in the nose, throat, and respiratory tract is among the common effects of pepper spray exposure.

Wheezing and shortness of breath are also possible symptoms. Along with this, irritation in the mucous membranes is also to be expected.

Direct contact can lead to serious respiratory compromise in rare cases, including apnea and cyanosis. Plus, asthmatics may experience worse symptoms.

Vomiting, nausea, and burning sensation around the mouth area are possible. It should be noted that nausea can also occur after inhaling OC.

If pepper spray is used repeatedly on a person, it could lead to certain mental health and behavioral effects.

For instance, continuous exposure could lead to anxiety and hyperventilation.

That said, human health effects can vary since not all people have identical health conditions, protective gear, and environmental circumstances.

Do Pepper Spray and Tear Gas Have the Same Formula?

Both are effective lachrymatory agents, causing some people to be confused about how these two defense products differ from each other.

While pepper spray cans have a variety of delivery methods, tear gas cans have a grenade-like design.

Also, the chemical makeup of OC spray canisters is primarily made of extracts from pepper plants that belong to the genus Capsicum.

On the other hand, tear gas sprays usually contain CN or CS gas, which are synthetic natural halogen compounds.

How To Use Pepper Spray

The OC spray should only be a self-defense tool for law enforcers and civilians, not an offensive weapon to use unprovoked.

Contrary to how it is portrayed on TV, pepper spray won’t induce paralysis.

If the assailant is determined, they can still hold, hit, stab, and shoot you even after being sprayed.

That’s why it is important to make every spray count because you won’t have too many chances to discharge your OC spray can.

Unfortunately, many people are not very familiar with using pepper spray effectively.

Training and understanding non-lethal weapons and tools, like what you’ll do with a firearm, are a must.

Failure to do so may result in accidental discharge or ineffective pepper spray discharge.

Models and actors on TV hold OC sprays with their palms loosely wrapped around the can with their index fingers positioned over the trigger.

The issue with this holding position is that it is not very secure.

An attacker can quickly grab your container of pepper spray and either throw it away or discharge it in your direction.

The proper way to hold your pepper spray is to put it in your dominant hand’s palm and clench it tightly while your thumb is over the trigger.

This secures your control of the spray while preventing the tool from snatching or accidental dropping.

It also allows you to use the spray as a hitting tool if the canister is empty or the effects of pepper spray seem to be inadequate.

You will want to be familiar with your pepper spray’s distribution pattern or how it is discharged from the canister.

That’s because the pattern defines how far the spray goes, the volume, and how ambient conditions and confined locations influence it.

The standard type of pepper spray used by both citizens and law enforcement agencies is one with a stream pattern.

It is comparable to a squirt gun, with the water blasting in a linear direction.

Due to its concentrated nature, users of OC spray with stream patterns need to be accurate to enhance the effects.

To increase your precision, your stream method should be aimed directly at the central area of the face.

A pepper spray with a foam pattern spread like shaving cream once discharged. While the foam is thick, it must hit the face of your attacker to maximize its effect.

Foam soaks the target spot and strongly clings to it. If they try to remove it by wiping or scrubbing, the substance will dig deeper into their pores.

The foam can smother the whole face, making it difficult to see and breathe.

Meanwhile, the OC content will cause severe burning, irritation, and shortness of breath.

The most notable benefit of pepper foam spray is its overwhelming effectiveness in enclosed spaces.

The fog spray pattern is mostly utilized in animal repellents, like bear sprays.

Because the composition splits the OC substance into tiny droplets, fog-type sprays are particularly effective in dealing with multiple attackers.

Spraying in an up-and-down motion in the approximate direction of your assailants should be enough to affect them.

These droplets can stay in the air for extended periods.

Even with indirect contact, as long as they inhale, there is a high probability that your attackers will get affected.

However, keep in mind that it’s not only them who are in danger of inhaling the OC and some nauseating gases.

You and innocent bystanders can also be on the receiving end of your self-defense chemical spray.

Always keep the safety feature of your pepper spray on all the time and only disengage it when you have to use it to repel attackers.

Even inside a private property, ensure that the trigger is not readily accessible to avoid accidental discharging.

After learning what is pepper spray made of, you should now be more aware of its effects and how it impacts its unfortunate victim.

A pepper spray can be a convenient self-defense tool, so it’s essential to learn its contents and how to maximize its features.

At the same time, you will also want to be familiar with how to minimize its effects if you get accidental exposure.