Learning how to hold a police baton and use one effectively was one of my training’s core components.

Knowing how to use a police baton is one aspect, but ensuring it’s used safely for defense can be challenging.

In this guide, we’ll go over how to use a baton for self defense and the different types available.

The Legalities of Batons

Before you learn how to use a nightstick, you must first consider whether it’s legal to own and operate.

Most states have made them illegal to own and carry, although there are some exceptions.

I’ve found that in states where you can carry a baton, they cannot be used offensively or damage property.

With that said, law enforcement is granted the privilege of carrying and using a baton for self-defense.

One of the most important criteria is to ensure that they are not used to cause death.

Also, LEOs cannot use them to target perpetrators’ heads or necks, especially if you’re dealing with a non-compliant subject.

For that sole reason, every LEO must learn how to use a baton for self defense efficiently and safely.

Although they are often required when dealing with combatant subjects, they can cause significant harm.

As a quick guide, let’s review which states allow and do not allow batons.

Before purchasing a nightstick, especially as a civilian, I highly recommend reviewing your local and state laws.

There are often many regulations about weapons that civilians can use in self-defense.

There are three primary types of batons that law enforcement officers are faced with throughout their careers.

These models include riot (straight stick), collapsible, and single-handed batons.

I’ve had the most experience with straight stick models since I carry one every day, but the others are quite common as well.

Most straight stick batons are about 36″ long and 1.25″ in diameter, although I’ve noticed some precincts have thicker models.

The thicker the material in straight stick batons, the more force they have behind them, making them challenging to wield.

You’ll often find they’re made of polycarbonate or hardwood, ranging from ash to hickory.

Polycarbonate sticks are most often black, while the wooden varieties can be coated with a clear sealant.

I’ve also found several different types of grip to allow you to have better retention when needed.

Some grips, such as knurling grips, are better to prevent being disarmed.

Leather thongs are often recommended if you’re engaging in riot scenarios, as you can quickly let go if needed.

However, through your training, you will learn how to prevent being disarmed and giving the assailant a weapon.

My largest gripe with straight polycarbonate sticks is their resilience in all weather conditions.

In the winter, there is the likelihood that they can shatter, and the heat of summer can cause them to warp.

However, they are useful for shoving large crowds back into place and asserting adequate force on contentious subjects.

The second option I’ve come across is an extendable or collapsible baton, which can often be preferred.

Most of the guys I’ve worked with refer to them as ASPs after the manufacturer.

They’re specifically designed to be between 16″ and 26″ when fully extended but can be collapsed to smaller sizes.

Extendable batons can be ideal if you carry a lot of gear on your belt, as they retract significantly.

Most of these models are made from aluminum alloy, while the heavier options are straight steel.

They’re easy to use because all you have to do is flick them outwards to make them extend.

That said, some of the more modern models I’ve seen have a push-button, similar to an umbrella, that makes them extend.

These batons are best for patrols, especially if you want a less noticeable defense on your belt.

I wouldn’t recommend them for crowd control, as they tend to break under excessive force.

I’ve also found that civilians often prefer these models as a form of self-defense in states where batons are legal. 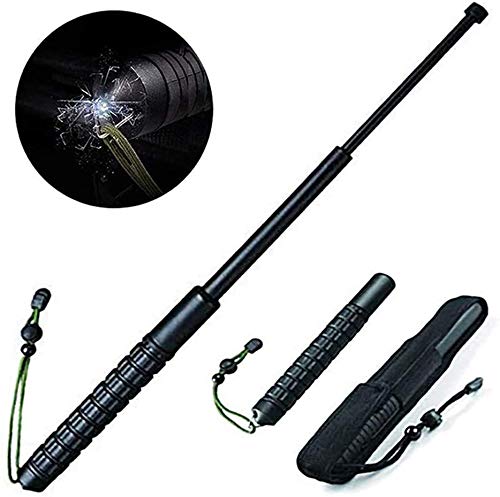 The last version I’ll go over is single-handed batons, an adaptation of the traditional tonfa.

LEOs can often prefer these models for self-defense since they have a short handle that allows for optimal grip.

You can also prefer them in situations where you’re at-risk for being disarmed.

Many LEOs refer to these batons as PR24s, and they hold a nostalgic value, which is why they’re still carried.

In my opinion, extendable batons are more lightweight, easy to manage, and recommended for everyday scenarios.

How to Hold a Police Baton: Essential Tips and Tricks

With a clear understanding of the types of batons on the market, let’s explore how to use a police baton effectively.

You will need to know how to use a baton and how to use it without maiming your attacker.

The single most crucial aspect of learning how to use a nightstick is to know how to retain it.

Considering it’s a large piece of material sticking out towards a subject, it’s easy to be grabbed and taken away.

Ideally, you’ll want to use your free hand to keep combatants away from the grip needed for control.

Defensive escape maneuvers, such as small quick circles, can often be preferred.

At times, you can also consider using both hands on the baton for added power as a deterrent.

Once you have more control, you can return to your guard position.

In the event an assailant grabs your baton, use rigid whirlwind motions to break their grasp.

You can then reassess the situation and determine if retreating is the best option.

Tip #2: Decide Between Immobilization and Pain

Pain is often the first thought when a baton is needed, but it’s not always the most effective option.

Inflicting the threat of pain can be a significant deterrent for individuals, especially with precise strikes.

I find it’s most useful to aim for the meatiest part of a subject, such as their thighs or arms.

This process ensures that I can follow through with a hard swing that will connect quickly.

By using two hands, I can put more force behind the defensive maneuver.

In situations where inflicting pain isn’t recommended, such as with intoxicated subjects, immobilization is preferred.

To protect myself, aiming for bones is the best measure for immobilization.

I’ll often use the same full-swing process but don’t use too much force to break the bone.

Depending on the subject’s physiology, I prefer to avoid the hands, elbows, knees, and shins.

It is also imperative always to avoid soft targets, such as the neck, groin, and head.

It’s important to note that learning how to use a collapsible baton or any other baton shouldn’t result in death.

In life-or-death situations where our firearms are unavailable or malfunctioning, though, it can be the only option.

As a life-preservation technique, aiming for the back of the neck, where the head meets the spine, is ideal.

You will want to consider using as much stopping power as possible but only in particular situations.

I always tell my team that they must clearly and accurately justify their perceived threat to life.

From there, they must have had no other reasonable means of stopping the attacker from using their batons lethally.

One of the essential tips for learning how to use a collapsible baton is to make sure your thong is fitted correctly.

Some officers prefer to have a long grip, while I prefer a short hold.

Ideally, the thong should fit to where you can maintain the best control over the baton at all times.

I’ve found that reaching and adjusting the nightstick is more straightforward with a short grip.

Also, the distance between my wrist and the grip is shorter, limiting the likelihood of being disarmed.

Overall, it’s proven to be the most effective for me in quick-draw scenarios.

Learning how to hold a police baton is a thorough process and should be taken seriously.

With improper techniques, you can put combatants in a life-threatening position inadvertently.

Over the years, I’ve continually trained to learn how to safely and effectively wield a nightstick.

6 shares
Special offer for our visitors